Here, There and Everywhere: Across the Universe with the Beatles

Here, There and Everywhere: Across the Universe with the Beatles
European Week of Astronomy and Space Science press release
RAS PR 18/9 (EWASS 5)
29 March 2018

The Beatles are one of the greatest cultural phenomena to come from the 20th Century, yet many people are unaware of their impact on science.

In ‘Here, There and Everywhere’, inspired by the book ‘La scienza dei Beatles’ (‘The science of the Beatles’),  Viviana Ambrosi  shows how the Fab Four can bring the study of celestial objects and the exploration of the universe closer to a large public audience. This is set out in a presentation on 3rd April at the European Week of Astronomy and Space Science in Liverpool. 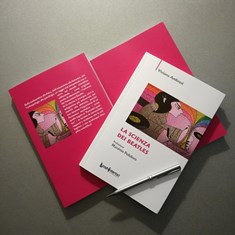 The Beatles formed at the start of the space race, and have always inspired scientists, whether they knew it or not.

The Beatles’ record company (EMI) used money from the sale of the White Album to fund scientific research. Some of which went towards Godfrey Hounsfield’s research into X-rays, which led to the invention of the CT scanner, for which he shared a Nobel Prize.

‘Across the Universe’ was transmitted into deep space in 2008, and numerous songs have been played as the wakeup call for astronauts on the International Space Station, including a live musical wake up by Paul McCartney in 2005.

There are five asteroids named: Beatles, Lennon, McCartney, Harrison, and Starr. There is also a crater on Mercury named ‘Lennon’, and when a diamond star (a white dwarf covered in crystallised carbon) was discovered in 2004, it was nicknamed ‘Lucy’ after ‘Lucy in the Sky with Diamonds’.

This was also the inspiration for ‘Lucy’, the fossil that rewrote the story of humanity, and this in turn has inspired NASA to name their first mission to Jupiter’s Trojan asteroids ‘Lucy’.

This mission is due to launch in 2021 and will take 12 years to complete its journey. It is safe to say that the Beatles will be an inspiration for many years to come.

Ms Marieke Baan
European Astronomical Society
Mob: +31 (0)6 14 322 627
This email address is being protected from spambots. You need JavaScript enabled to view it.

Ms Viviana Ambrosi
SISSA, International School for Advanced Studies
Mob: +39 (0)3481 027 200
This email address is being protected from spambots. You need JavaScript enabled to view it.

‘La scienza dei Beatles’ (‘The science of the Beatles’) by Viviana Ambrosi.

NASA’s patch for the Lucy mission. The diamond shape references “Lucy in the Sky with Diamonds” by The Beatles, while the skeleton on the left represents the Lucy hominin fossil, whose name was inspired by the song.